We’re just about to leave to start installing our stand at the first ever Reading Contemporary Art Fair.

The sight you see before you is presumed to be a result of some sort of cult ceremony that has occurred in this window. We can only speculate on the real meaning and origin of this practise but we can deduce that it involves some being known as ‘OTTER’, since the banner at the back claims, in between the shapes of the triangles, OTTER IS HERE 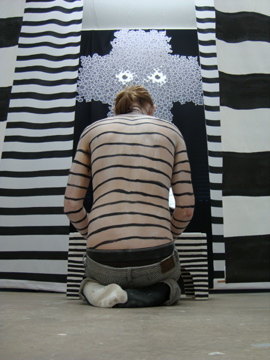 Pete Montford’s work explores the boundaries between what we think of as fact and fiction. Using myths, folklore, history and the imagination he creates stories and scenarios which confuse that which we usually take as the ‘normal’ and reinvents everyday life for a more exciting twist. The sentence that best sums up his idea is that made by Guy Debord around 50 years ago, which was also the main proposal for the Situationist International, ‘broaden the non-mediocre portion of life, to reduce its empty moments as much as possible’. Pete believes in the setting up of fictional scenarios in an attempt to break down what we think of ‘usual’ and ‘true’ and start developing a way of living life which embraces and even thrives on fiction. He wishes to promote a better way of life through art and fiction.

For this piece of work for the project ‘Open for Art’, Pete is going to create a climate of uncertainty for the viewer, calling upon both real and imagined realities and weaving an image that will cause both visual and conceptual intrigue.

For more info on Pete Montford, visit his site here